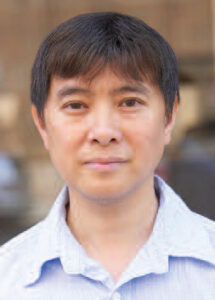 Jeffrey C. Yuen comes from a Daoist lineage and is an ordained priest of two traditions of Daoism, the Jade Purity and Complete Reality schools. Mr. Yuen trained under his adopted grandfather, the late Daoist Master Yu Wen (1872-1981) of the Yu Qing Huang Lao Pai, a sect from the Shang Qing tradition of Daoism that developed during the later Han Dynasty (3rd Cent. CE). Master Yu Wen trained in Mt. Hua and learned all the facets of Daoism, including the classics; rites and liturgies; healing arts; and divination. He later traveled extensively throughout China and served as the lineage holder of the Daoist martial arts system we know as Wu Xing Quan/Five Element Fist – an internal and monastic style of Hua Shan. Having a strong resonance with Daoist teachings ever since childhood, Jeffrey studied extensively under Master Yu Wen and was allowed to openly practice and serve the community when he was 16 years old.

Jeffrey has served as Dean of Academic Affairs of the Acupuncture Program at the Swedish Institute College of Health Sciences and is President of the International Tai Chi Institute, both in New York City. Mr. Yuen was the first recipient of the Educator of the Year Award conferred by the AAAOM. He lectures frequently nationally and abroad. Not long ago, The Academy for Classical Chinese Medicine, a post-graduate center for Chinese Medicine was created in Dublin, Ireland, devoted to his teachings of Classical Chinese Medicine.

Previous Topic
Back to Lesson
Next Lesson