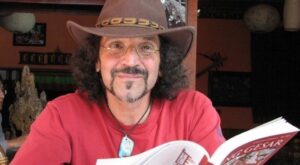 “Alex Tiberi, one of the early pioneers of Chinese Medicine in the United States and a founder of Pacific College of Oriental Medicine, passed away on November 18, 2014. Throughout his life, Alex practiced medicine, lectured, and led study groups around the globe, inspiring innumerable students with his irresistible enthusiasm. He was a student of Buddhism for over 30 years, and practiced both Tibetan Vajrayana and Japanese Shugendo. Alex was also an accomplished martial artist, well-versed in horseback archery, aikido, and jousting. Alex will be missed by many.” – Pacific College of Health and Science

For thirty years, Alex Tiberi practiced oriental medicine in both its most traditional and most modern forms. Having served an apprenticeship with a sixth generation Korean master of oriental medicine, Alex was proficient in the ancient five element and constitutional forms of acupuncture. His training in modern western science allowed him to integrate traditional oriental medical concepts with modern biomedical theory. MAS hosted Alex as an instructor in Maryland many times due to popular demand. Alex was often introduced as one of the most popular speakers on Acupuncture and Chinese Medicine, and its no wonder. With an engaging and easy going style, Alex was guaranteed to be as informative as he was entertaining. Alex often said, “Don’t confuse obscurity with profundity. What I really like about Chinese medicine is it’s simplicity.” This is immediately apparent in the clear and concise way he presents his ideas. The information is accessible, practical and easy to incorporate into ones practice. When he presented at MAS seminars, the evaluation forms were off the charts with excellent ratings. Comments included, “The best seminar that I have ever attended in my life!!” and “I would come to hear Alex read a phone book!”

Previous Topic
Back to Lesson
Next Lesson
Login
Accessing this course requires a login. Please enter your credentials below!
Lost Your Password?
Register
Don't have an account? Register one!
Register an Account